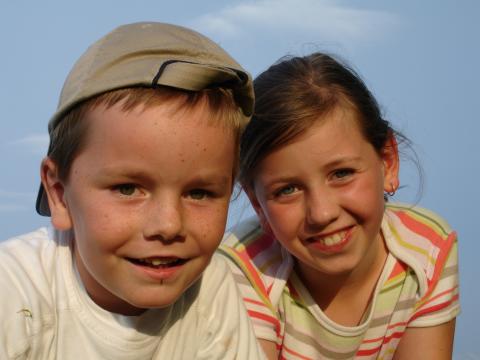 As siblings, Micah and Ellie had been through everything together. When their grandmother passed away and they were placed in Emergency Shelter Care because they didn’t have other family, they faced a lot of unknowns together. But in Shelter, Micah displayed a lot of challenging behaviors, including becoming inconsolable when upset and acting out at school and with his Shelter mom. To help Micah, he was placed into a CFC foster home with foster parents specifically trained to meet his needs.

At only seven, Micah had already experienced a lot of trauma, including having both of his parents incarcerated and the passing of his grandma. He struggled to process his emotions appropriately and saw most people as “the bad guys.” Micah’s team matched him with a therapist and two of FCNI’s Rehabilitation Specialists (RSs) who focused their time on learning about the little boy beneath the behaviors so they could better support him. They learned that Micah, while a seemingly “tough guy,” really responded well to animals. To foster his empathetic and caring side, Micah was encouraged to bond with his foster family’s many animals, including helping to care for them. The team also worked on other creative ways to help Micah learn better coping and communication skills, including giving him “superhero” awards for good days, and using “stop” and “go” signs to help him communicate his needs when words failed him.

While Micah responded well to the one-on-one attention he received from his CFC foster parents, he still had hard days—days when something would trigger him and he would get upset and lash out. Having a strong support team, Micah’s foster parents were able to work through these episodes with him, providing him safe space and comforting words that eventually calmed him and assured him that no matter what, they would be there for him. When Micah recovered from these tantrums, he was able to do so in his foster parents’ care, and they could talk about what had happened and what they could do differently to help Micah. Likewise, at school, when Micah felt a hard day coming on, he learned to voice his needs to his RS and teachers, and they were able to support him through it, reminding him of his coping skills and making sure he remained safe.

After several months in care, the team moved forward to have Ellie placed with Micah in his CFC foster home. His foster parents had established a strong bond with Micah, and they want to adopt him and his sister. While Micah still struggles sometimes, he’s been able to improve his behaviors at school and at home greatly, showing his growing maturity and his strong desire to have healthy relationships with his new family and friends.